The Difference between Stamping Compound Die and Progressive Stamping Die

Stamping is a term used to describe the process in which flat sheet metal in either blank or coil form is placed into a stamping press, after which a tool and die surface forms the metal into the shape of a net. It also refers to the process in which an engraved die is used to cut and stamp (that is leaving an impression) on a metal sheet, usually to imprint coins or medals. 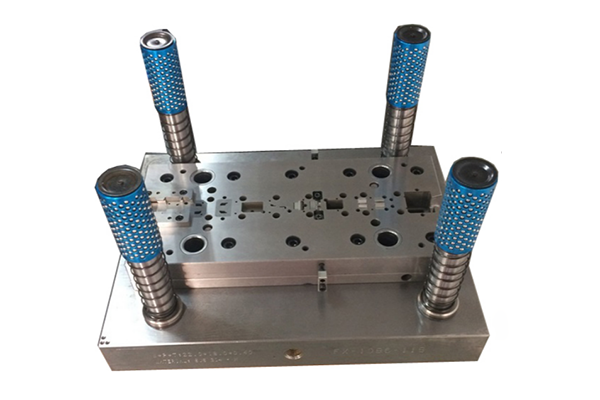 Stamping utilizes dies and these come in different forms including the progressive stamping die and the stamping compound die. A stamping die is a special and unique precision tool that cuts and forms sheet metal into a desired shape or profile. The die's cutting and forming sections typically are made from special types of hardenable steel called tool steel. Some parts of Dies may include cutting and forming sections made from carbide or various other hard, wear-resistant materials.

Most stamping dies are made of a number of basic components, including die plates, shoes, die sets, guide pins, bushings, heel blocks, heel plates, screws, dowels, and keys. Dies also need stripper, pressure, and drawing pads, as well as the devices used to secure them; spools, shoulder bolts, keepers, and retainers, as well as gas, coil, or urethane springs.

In compound die stamping, the die becomes separated or blanks the part from a steel strip in just a single stroke. The stamping compound die will perform multiple cuts or punches in just a strike as compared to multiple strokes. This is a relatively cost effective method for stamping medium to high volume parts while minimizing the costs of die and labor. Compound dies are oftentimes used to stamp less complex flat parts such as washers. Stamping compound dies are kinds of dies in which more than one operation takes place on a single station. These dies are mostly used for cutting operation and hence addressed as cutting tools. These dies allow simultaneous cutting of internal as well as external part features in a single stroke in some cases. Compound dies are relatively more accurate and economical as compared to single operation or simple dies. In the operation of a stamping compound die, a washer is prepared by one stroke of the press. This washer is produced by simulation blanking and piercing operations.

The progressive stamping refers to a metal working technique that can encompass punching, coining, bending and several other ways of modifying metal raw material, combined with an automatic feeding system. It utilizes the progressive stamping die which is often referred to as “follow on dies” and has a series of operations. At each station on the work piece, an operation is performed during the stroke of press. However, in between the two presses, the work piece gets transferred to the next station and is worked there. In this operation therefore, each press operation makes a finished piece.