A die is a precision tool used in manufacturing industries to cut, shape and form different products and materials. It uses the force of a press to perform its function. Like a mould, dies are customised to match the products they are used to create. Stamping dies are primarily used to cut and form sheet metals in manufacturing industries. Since dies are always customised to the materials they produce, most die operations are named after the die performing the operation. For example, a die that performs a bending operation is called a bending die.

The components of a die include die block, pierce punch, stripper plate, pilot, blanking die, shank, blank punch and so on. Stamping die moulding can be differentiated by different types of dies also based on size and production methods.

A simple die performs simple operations like perforating parts and also notching and lancing operations. A simple die requires a press operator to load and unload parts before and after each cycle.

Progressive die stamping is more efficient and economical than most dies. They provide an effective means to feed the sheet metal as a coil strip for "a progressive" operation. All the necessary stations are mounted on a single die set and are pre-programmed in timing and sequence to work on each part progressively. The die is unique because it requires minimal handling as the parts are fed through the machine until they reach completion. 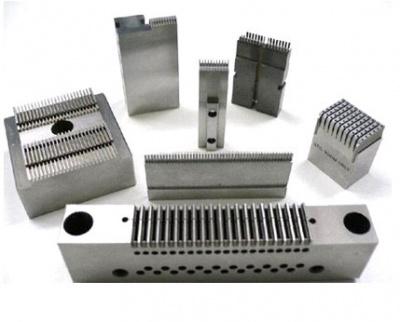 A compound die performs both operations of perforating and blanking in the same station. Usually, the perforators are in the upper die set and the inner punch mounted in the lower die set. Therefore both operate at the same time and run a single-hit process. The disadvantage is that slugs are left in the die which will, in turn, require a means of part removal. Aside from this small setback, compound dies are relatively more economical to build than progressive dies. They also perform with superior accuracy.

Transfer dies are strategic as the name implies. The line dies are perfectly timed and evenly spaced in one press. They are different from progressive dies in that the piece parts are transferred with travelling rails which are conveniently mounted within the boundaries of the press. They are equally effective and fast. The distance each part must travel between stations is called the pitch.